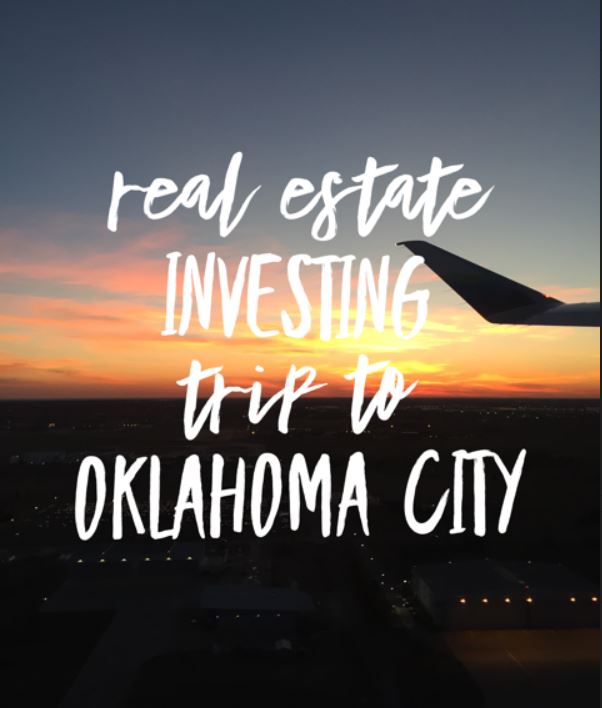 This past weekend Deena Iverson and had our fourth investing trip together, and this time we visited Oklahoma City.

Deena and I took our first investing trip to Detroit in 2013 (we also took a short day trip from Detroit to Toledo, Ohio on that same trip), and then we did Memphis, TN in 2014, and Indianapolis in February of 2016.

While we both are very comfortable buying out of state without first having visited the area, it sure is nice to be able to meet who you’re working with and get an idea of what neighborhoods you might be buying in.

A few months ago Oklahoma City was not even on my radar. I literally thought OKC was a small city with no economy outside of cattle and oil. I was wrong.

After doing some initial research, I learned that Oklahoma City was ranked number 1 for US cities with high paying jobs & low cost of living, it is now the 28th largest city in the US, and it’s had a massive population growth of over 8% from 2000 to 2010.

Being a great real estate investor means you really need to start networking with more people, and I was connected with our OKC team through a local seattle friend who insisted I reach out.

Long story short, I spoke with Alyssa & Curtis over the phone and knew these two had it together. They not only knew how to find deals in the best areas, but they understood what is most important when it comes to investing – cash flow and ROI!

After a few months of looking at their deals, and referring them out to other clients who were looking for good deals, Deena and I finally decided we needed to pay a visit to OKC.

Flying out of Seattle on spring break weekend was not the best idea, however we did get to take advantage of the Centurion Lounge – an exclusive lounge only for American Express Platinum cardholders, which I had gotten as part of my recent travel hacking venture.

We arrived in OKC on a Wednesday night around 8PM and immediately noticed how nice the airport was (it is tiny though, and no lounges) and we picked up our rental car quickly and headed out for a bite to eat.

We ate at Barrios, a Tex Mex restaurant in Midtown OKC. The area was pretty busy with lots of restaurants in converted industrial buildings. Barrios happened to be an old mechanic shop back in the day, they even left the large bay garage doors, polished them up and open them when it’s nice out.

After dinner we drove over to our cute Airbnb, which was a triplex in the Asian District. A local connection hooked us up with our own units in the triplex, and the neighborhood was in an area of beautiful older homes.

The next morning we slept in late and then went out in search of some coffee to get us going before a full day of looking at properties and touring the city.

We lucked out when we found Classen Coffee Company, a newer coffee shop that opened in a building that sat vacant for 50 years.

I love how Oklahoma City is about converting their old buildings into new businesses while still maintaining the charm of what once was. In Seattle it’s more about tearing down to build new over renovating existing.

We visited Classen Coffee Company or our morning cup of joe every day that we were in OKC.

Day One Itinerary – Meet our agents, get a lay of the land, view completed projects & projects being renovated

After getting a slow start for the day, we drove to meet with our local team, two agents who partnered together to form their unique business model.

Both are licensed, yet 95% of what they sell is off market. Working with agents who have the ability to find off market properties is a huge benefit to investors, and they are really hard to find!

A huge benefit to working with licensed agents as opposed to turn key companies and wholesalers who are not licensed is that a licensed agent has a fiduciary duty to protect your interests, whereas a non-licensed person who is selling you property can literally tell you anything and get away with it!

I’m not saying that all wholesalers and turn key companies are bad, though I do feel that it’s important to bring up this very important distinction.

We meet with Curtis & Alyssa and headed to lunch at Republic Gastropub in Classen Curb, a trendy new shopping mall in the Brookhaven neighborhood.

Fun fact about this area, the owner of Chesapeake Energy helped develop this area so that he could recruit talent from other cities. They talked Whole Foods & Trader Joe’s into moving in across the street from their corporate campus so that it was convenient for their employees.

After lunch we went to check out a turn key duplex that one of our investor clients purchased. It was an interesting project because they purchased and flipped four houses next to each other in the same cul-de-sac, and they’re working on getting two across the street! 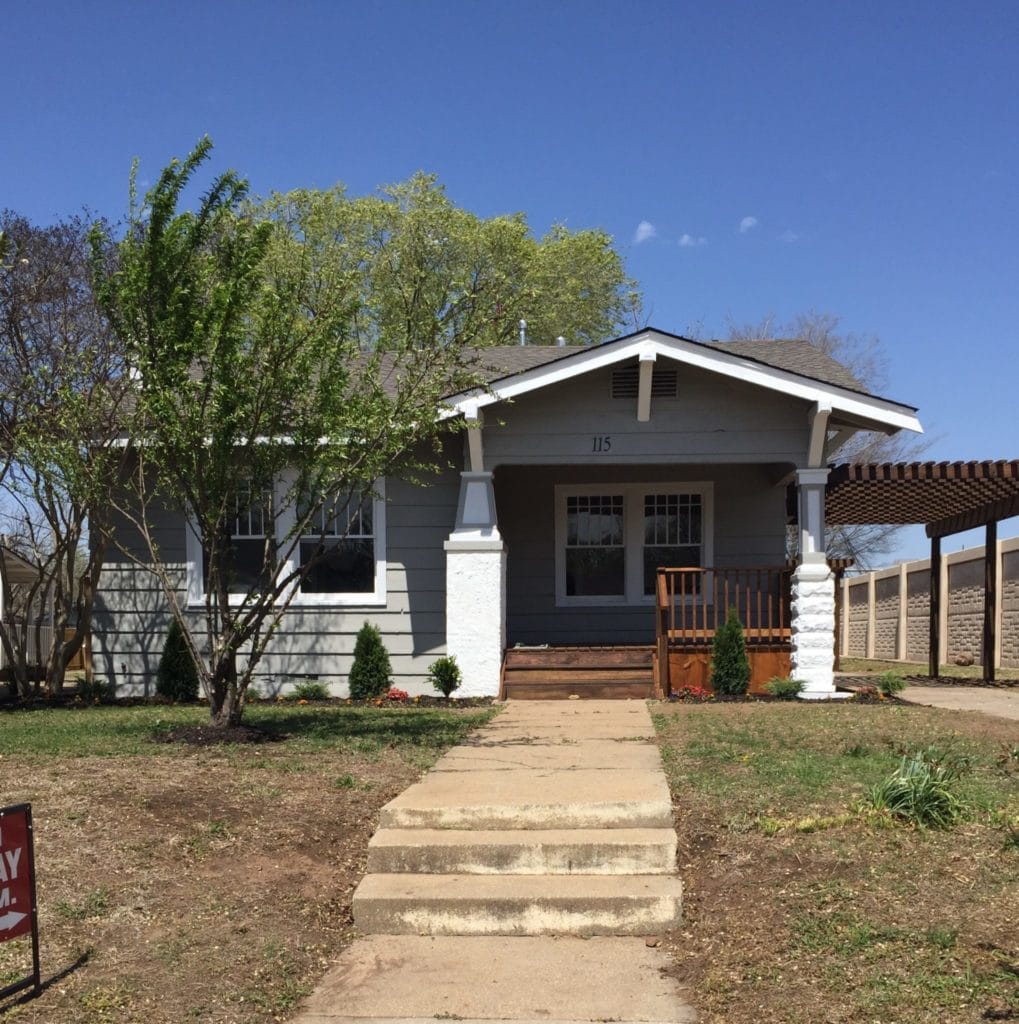 To give you an idea on the kinds of multi-unit turn key deals they offer, our client purchased the duplex for $170,000 and the front house is expected to rent for $1100 per month, and the back unit will be about $700. Each unit is separately metered and has been fully renovated.

After driving through a few neighborhoods in Central Oklahoma City we went to look at a single family retail flip near the Asian District, that had recently been renovated. That one sold in 3 days at full list price. 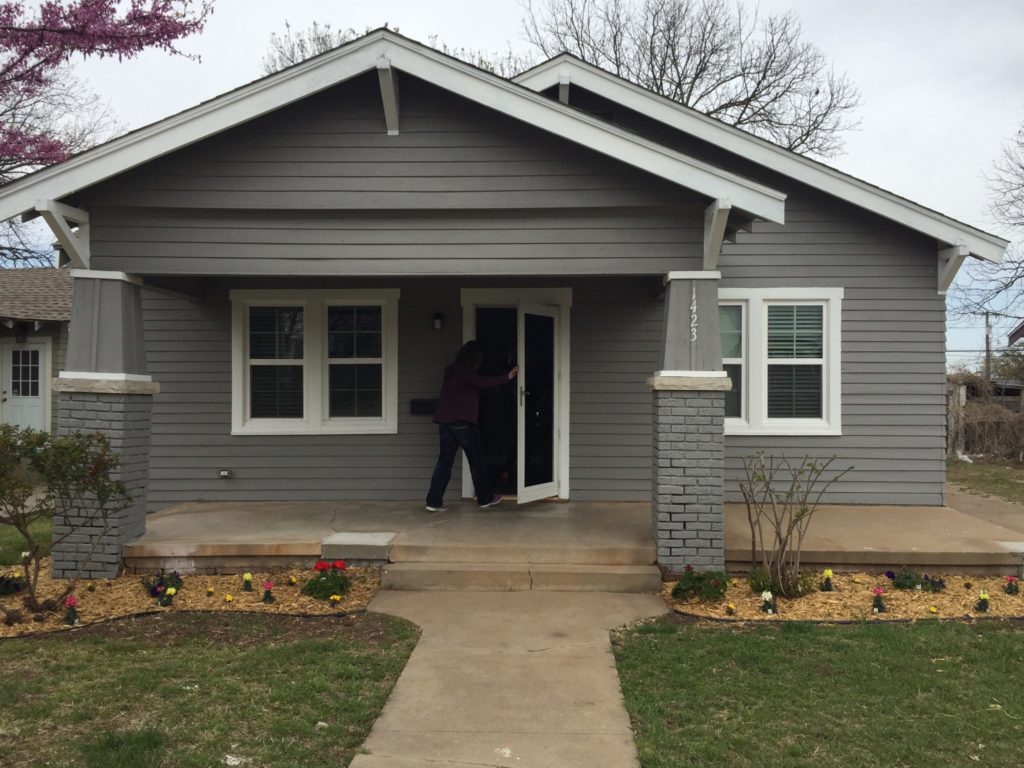 Then they showed us a duplex that just closed, and is in the process of being renovated. That one is in a C neighborhood, and will rent for $700 each side and once it’s renovated, it will sell for $100,000. 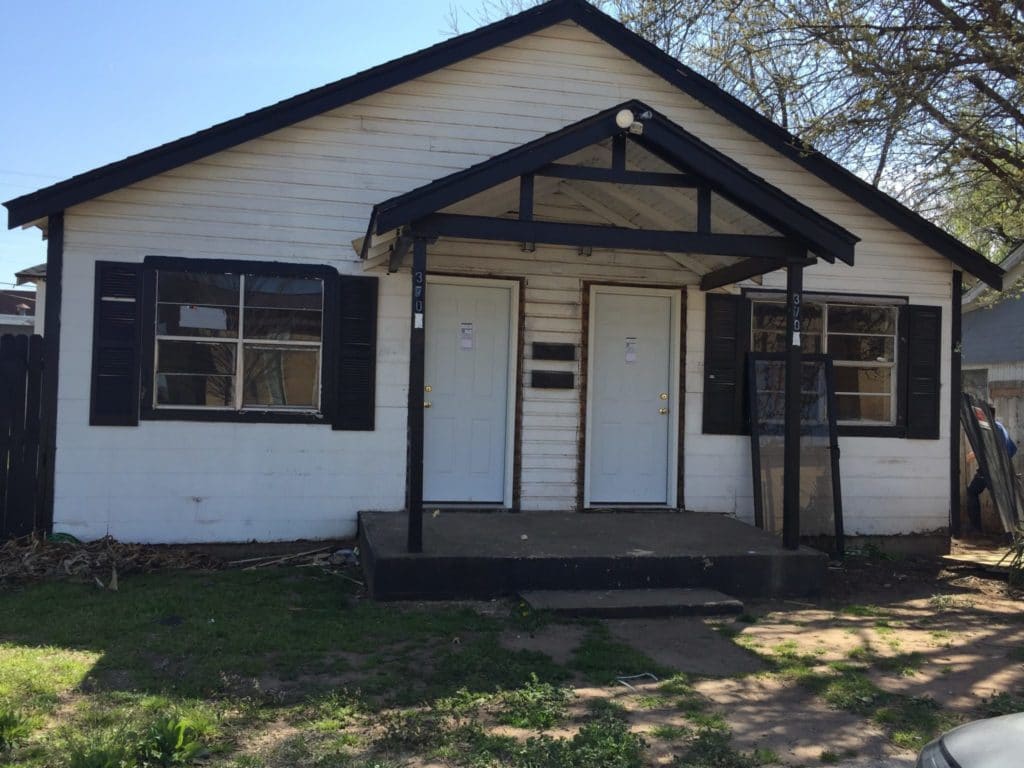 After we looked at several properties in the downtown area, we drove out to Del City & Midwest City to see what options were available in those areas, and to look at more projects.

We were told that these two areas do not really appreciate, and that most of the renters are military or single moms who are wanting a more affordable rent, while being in a good school district.

Tinker Air force Base is nearby and employs over 26,000, making it the largest single site employer in Oklahoma. 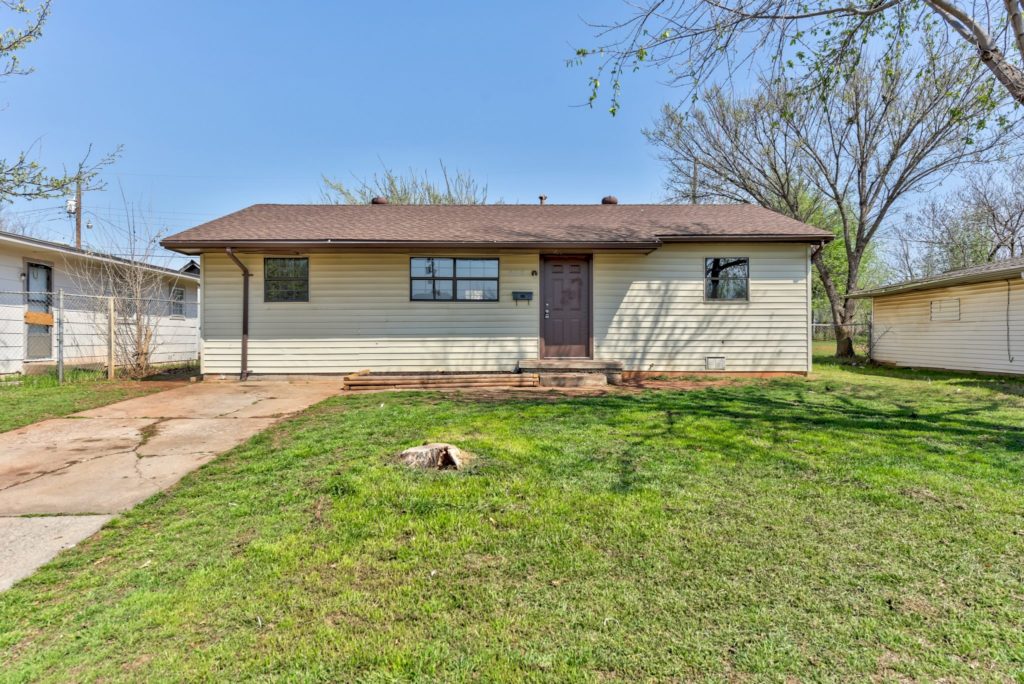 We looked at the house above just as the contractor was finishing it up. It’s a basic 3 bed 1 bath 1056 sf single story home with two large sheds in the backyard. Asking price is $65,000 with estimated rent of $750 per month.

After a busy day of looking at properties, Deena and I went off on our own for dinner and to explore the city.

We drove up to Edmond, which we were told was the expensive suburbs with the best schools. With no destination in mind I decided to drive over to lake Arcadia.

We ended up getting stuck in some traffic, and with some quick thinking I found what I thought was a work around side road, but we ended up going from a paved road to dirt & potholes pretty quick!

The Kia rental car did quite well in the muddy back road, and fortunately I received the full rental car deposit back!
After our off roading and lake visit, we headed back downtown for some dinner.

We ended up near the bricktown neighborhood and found an awesome canal area with several restaurants.

We ate at the Bourbon Street Cafe, and while the food was good, it wasn’t quite the same as the food in New Orleans but the area was fun to check out.

We met for lunch at Fuzzy’s tacos in Chisholm Creek area, a brand new mixed use development with restaurants, shopping and entertainment. The whole area is being developed and it’s likely to have the local housing market appreciate from the growth.
From there we went and visited an off market 34 unit apartment complex nearby. 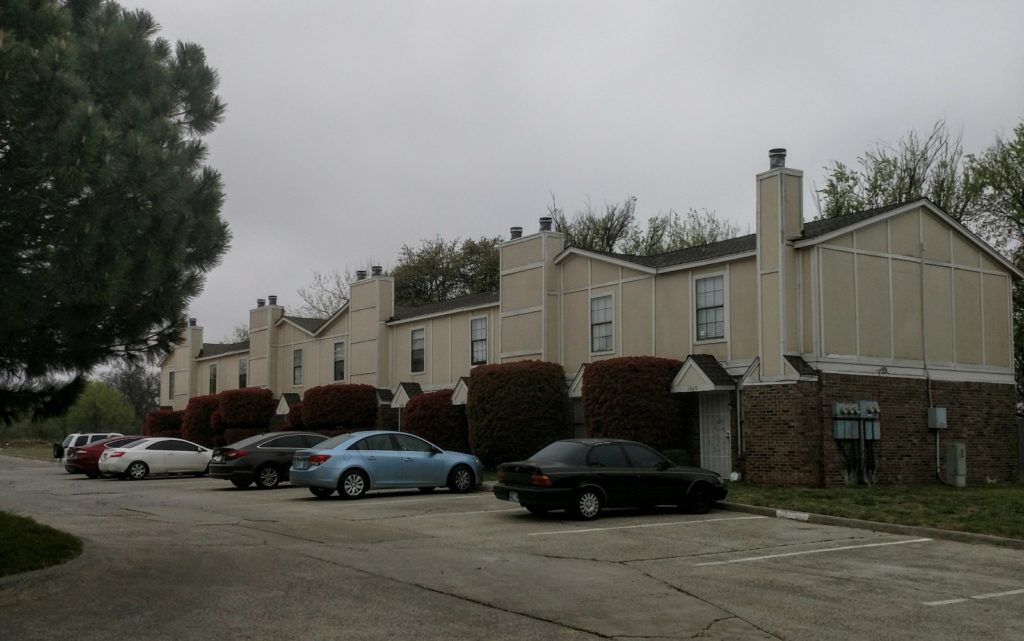 We were able to walk through two of the 9 units that were vacant, and they were in decent shape, just needed new flooring, paint and a deep clean. The rest of the building had some exterior rot and other items that needed to be addressed, but overall there is potential with this one.

I am currently evaluating this property to see if it makes sense to make an offer.

Another property we drove by was a 12 unit not to far away.

This one is in great shape and didn’t require any work. The numbers are great on this one, coming in above an 8 cap.

After the 12 unit we did a parking lot drive through of a 40 unit, though we had limited information and it was raining pretty hard so we didn’t get photos on that one.

Last but not least, we went to a 72 unit complex which included 154 storage units behind.

The 72 unit property was by far my favorite, and we went back to the owner with a request for the T-12 (trailing 12 months of income & expenses) along with a current rent roll.

I’m not sure that there is a value add play with this one, but if the cash flow is good enough it still might make sense.

After the apartments we took a break and headed back to Chisholm Creek, but did a short detour through Gaillardia, the most expensive neighborhood in Oklahoma City.

It is so prestigious that it is completely gated, with full time security. Fortunately Curtis knew someone who lived there, and a little name dropping got us past security.

Later in the evening we regrouped for dinner at The Ranch – where Deena and I had the best steaks of our life!

On the last day our flight left at 8PM, so we had a lot of time to do more exploring.

We went to breakfast at Syrup, an impact based brunch boutique owned by missionaries in South Africa. They fund orphanages, help with disaster relief, and community development.

The food was amazing, the service was outstanding, and we loved that we were contributing to their cause.

After breakfast we did drive by’s of 12 properties that Alyssa was hoping to acquire from a retiring seller. The sellers portfolio included single family homes, small multi-unit properties, and some smaller apartments.

The condition and occupancy varied, and some properties looked turn key and others needed some major renovations. Here are a few examples:

After a full day of driving around we headed back to the airport, which unfortunately does not have any lounges, but had no lines and was very quiet.

There was so much we loved about Oklahoma City.

No traffic, clean, very little crime, amazing food (that was cheap!), excellent price to rent ratios, low unemployment rate, diverse economy, high paying jobs with a low cost of living, 300 days of sunshine (coming from Seattle this is a big deal), and little competition from other investors.

I can confidently say that Oklahoma City is my new favorite place to invest, and we’re even planning another trip back in July.
If you are an investor and are interested in OKC, fill out this form and I’d be happy to connect you with our local team!